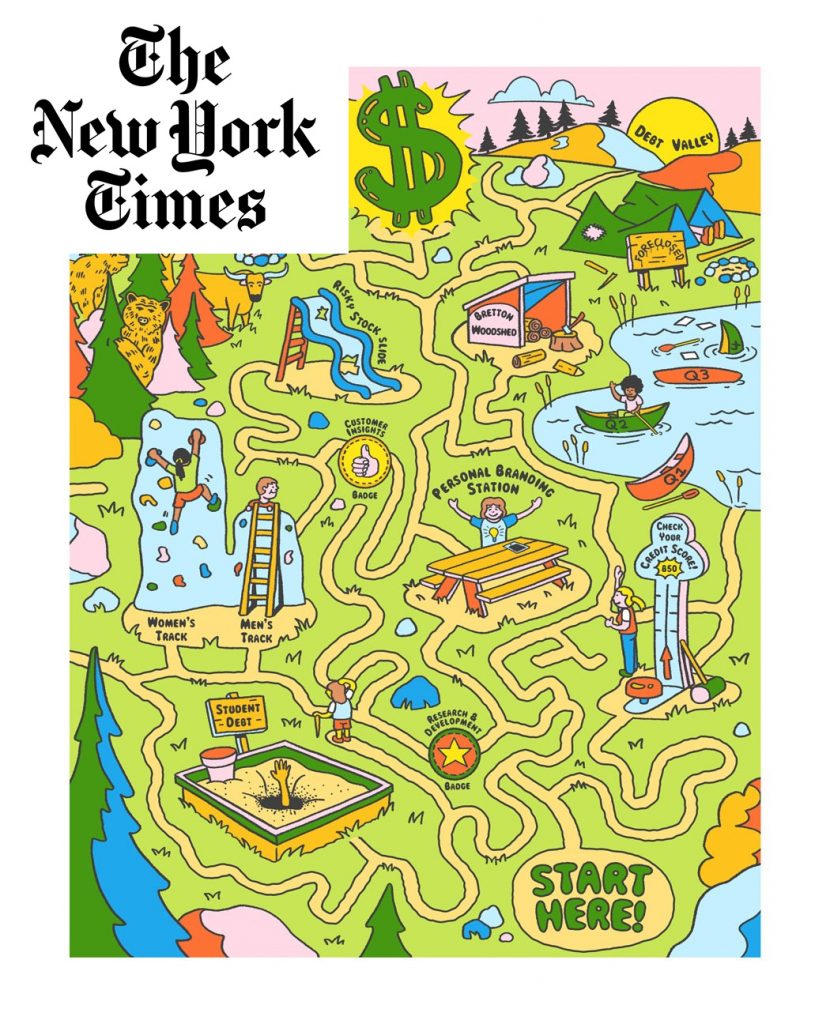 Summer camp: It’s is not just for campfires, crushes on counselors and crying alone in a bunk bed. Summer camp is also for capitalism.

Or at least it is for a growing number of children whose parents enroll them in workshops and sleep-away trips that focus on stimulating the entrepreneurial mind-set, enlightening youth about the importance of innovation, and imbuing the next generation with an appreciation for surplus value. Because really, what could be more fun?

Biznovator, a company in South Florida, offers a slew of camps, academies and programs that are designed to teach students about how to be businesspeople and innovators (biznovators!). That includes the weeklong “Kamp for Kids,” which this summer will be held at the Divine Savior Academy, in Doral, Fla. There, children as young as 8 will learn how to monetize their hobbies, interview local corporate executives, and shoot YouTube commercials for their prospective businesses.

It also includes the more advanced “Connect Camp,” for preteens and high schoolers, which is typically run at Florida International University. Campers get tours of places like a Starbucks corporate office or the Federal Reserve, and are tasked with analyzing problems facing various companies and industries. Days are broken up with stints on a ropes course and trust exercises, and students are encouraged to network during lunch, which is included in the cost of tuition. (Suggested topics of discussion, according to a schedule on the camp’s website, include “The Richest Kids in America” and “The Time is Now: Harnessing the power of this moment and taking action today!”)

A New York-based nonprofit, the Network for Teaching Entrepreneurship, or NFTE, also runs in-school and summer programs for students in 6th through 12th grades. One of the offerings — called “BizCamp: Business Ideation and Crafting the Pitch” — includes classes on “Opportunity Recognition” and “Delivering Value to Customers,” and culminates in a pitch competition that is structured like an episode of the T.V. show “Shark Tank.” (Winners are eligible to compete in a National Youth Entrepreneurship Challenge, also sponsored by NFTE.)

The goal of the organization — founded almost three decades ago with support from billionaire philanthropists, multinational banks and corporate consultants — has been, since the beginning, to “activate the entrepreneurial mind-set and build start-up skills in youth,” said Sophia Rodriguez, the director of research and analytics at NFTE. (“We actually pronounce it ‘nifty,’” she clarified.)

And because it is not enough to activate the entrepreneurial mind-set — one must measure it, as well — all NFTE students are assessed, by the end of their programs, on “noncognitive skills” and on something called the Entrepreneurial Mind-set Index. That exam, which was written in collaboration with Ernst & Young, one of the world’s largest accounting firms, and the Educational Testing Service, which administers the SAT, is meant to promote “a very talented pipeline of young people that employers desperately need and are increasingly not finding,” Ms. Rodriguez said.

“We look at NFTE youth as future model employees,” Ms. Rodriguez said. They currently reach about 25,000 students in schools and about 3,000 kids at camps in the U.S. “We’re talking about high school students, but we definitely see interest from our corporate partners on wanting to kind of leverage the learning that our young people are developing.”

Juan Casimiro, the founder and chief executive of Biznovator and a former Bronx public-school teacher, believes children are never too young to start learning about business. “For more than 31 years, I’ve been running leadership, social entrepreneurship and innovation camps — typically during the summers,” Mr. Casimiro said. “When I got involved, it was harder to convince parents, funding sources, organizations, that kids can learn business very early. They couldn’t believe that a kid, at 10, can pick up these business principles and literally start their own little micro business.”

Now, Biznovator is piloting a Kamp for Kids program designed for children as young as four years old.

That children can learn about doing business at a young age comes as no surprise to the Girl Scouts, which offers 31 entrepreneurship-related badges and has long been defined by its focus on honing leadership skills. (Fourth graders can earn “Cookie CEO” badges, although they have to wait until sixth grade to earn the “Financing My Dreams” or “Marketing” patches.)

“I can’t even begin to tell you how many business owners tell me as adults that their inspiration to become an entrepreneur and business person started by selling Girl Scout Cookies,” Jessica Muroff, the chief executive of the Girl Scouts’ West Central Florida chapter, said.

And Girl Scouts aren’t just in the business of selling cookies. Now, many of the youth organization’s chapters offer a supplemental program called “Camp CEO,” wherein Scouts are paired with a female mentor for a weekend of team-building and skill-sharing exercises.

“It’s the whole spectrum of a woman in business: the challenges she had to overcome, personal branding, communication, etiquette, and then also teaching these girls how to have agency,” Ms. Muroff said. “Then we talk about finances.”

Given that most young people aren’t going to grow up to be titans of industry, education in basic financial literacy is probably the most widely useful lesson these programs have on offer. Alicia Brockwell, the C.O.O. of an event space in Los Angeles’s Highland Park, runs a program called “Camp Millionaire” that is specifically meant to help families in her neighborhood deal with debt and financial pressure. The program’s mission statement is: “We want kids and teens to learn how to be financially savvy before they leave home so they move out, stay out and become responsible, contributing members of society.”

It’s now offered in a variety of locations and is promoted as a way to make financial literacy fun. “The idea is that if you can teach kids and teach the parents, you will now have a generation that won’t be hindered by the burden of debt,” Ms. Brockwell said.

Mr. Casimiro of Biznovator also sees entrepreneurship training as a path to financial literacy though, as well as a path to freedom, especially for students from low-income communities. “We’ve got to teach them that lesson, because what they’ve been exposed to is multigenerational thinking that government owes me something. We want to change that mind-set,” he said.

“Regardless of where and how you were born, with the right support, education, love, mentorship — kids starting with zero, let’s say, in poverty — can become extremely successful,” he said. “I really believe that.”

All this happens in an environment where, year after year, polls show, American young people are developing an increasingly unfavorable view of capitalism.

In Mr. Casimiro’s vision of capitalism, there aren’t winners and losers. “There are winners and there are learners,” he said. Students in Biznovator programs also always learn about the importance of philanthropic giving. “If you study most philanthropists, most of those guys were all entrepreneurs,” Mr. Casimiro said. Yes, there is a direct benefit, from a tax incentive perspective, for wealthy people to engage in philanthropy, but, he said, “I want to really believe that most are doing it for the right reasons — to change or impact the world.”

Take Charles Koch for example. The C.E.O. of a company he inherited from his father, Mr. Koch is likely one of the ten richest people in the world and has dedicated most of his adult life to giving his money away to causes in which he believes. Best known for building a network of wealthy donors and powerful political operatives to rival the Republican Party itself, Mr. Koch has also donated to NFTE.

In fact, Steve Mariotti, NFTE’s founder, joined Mr. Koch on theLibertarian Party’s National Executive Committee in 1977, where he rewrote the party’s platform, as Mr. Mariotti recalled in an essay for HuffPost about Ayn Rand.

Embedded in these programs is at least one contradiction: They promote entrepreneurship and leadership, but are also training kids to be good employees; to be innovators and disrupters, but also to be model office drones.

When asked whether NFTE’s programming is meant to inoculate children against the clarion call of socialism, Ms. Rodriguez demurred. “We’re pretty apolitical,” she said. “We definitely are promoting the entrepreneurial spirit in youth, but it’s not so much in order to promote capitalism versus socialism. I think it’s even bigger. It’s empowering the individual to feel like they can succeed no matter what the future looks like.”

ABOUT BIZNOVATOR:
BIZNOVATOR is a youth empowerment platform that offers a year-round experience for young people interested in entrepreneurship, social innovation and global leadership. Through our seminars, workshops, summer camps and in school Academies, BIZNOVATOR helps young people to DISCOVER their purpose, TRANSFORM their mindset and CONNECT to their future.  We have recently launched our Online Learning Platform, www.mybiznovator.com which enables young people from all over the world to experience our unique BIZNOVATOR programs. We invite you to join us!

Juan Pablo Casimiro is Founder and CEO of BIZNOVATOR. With more than 30 years of empowering youth and adults globally, Casimiro never misses a moment to teach, coach and challenge his clients to live their dreams. Casimiro was born in Dominican Republic and grew up in New York City.