For most of my adult years, I spent the first week of July working with youth entrepreneurs-to-be. Teens, generally derided by older generations as slackers, willingly and enthusiastically participate in summer programs to challenge themselves. While there are many summer enrichment programs from athletics, technology, music and art; I have a fondness in watching teens grapple with income statements, marketing plans, break even analysis, and idea generation.

Teens are constantly walking down the path toward independence, many running. The romance of independence appeals to youth, and the looming responsibilities of adulthood looks better when they can stamp their own identity on an economic future as a potential entrepreneur.

My current cohort of learners have assembled at Florida International University in the competitive Biznovator program, recently touted in the New York Times and Le Monde (published daily in France). These students have traveled to Miami from Haiti, Dominican Republic, Puerto Rico, Mexico, and Venezuela in order to present business plans drafted this week. Impressive ideas have emerged including business solutions to drunk driving tragedies, deforestation in Haiti, the current-events-tourism-crisis at Dominican Resorts, and, less lofty, but perhaps the most market satisfying idea of all — a product to produce faster service at restaurants.

There are many practical ideas as well including sports field management, food delivery, clothing retailing, landscaping services, and useful app development. I know that only some students will, after our camp concludes, execute their plans. But encouraging the mindset of independence and innovation is one of our goals.

There is one idea, formed by a Mexican, 14, & Dominican, 15, business partnership, that, in my opinion, can be an amazing success. It is such a natural need for college campus life, one this duo identified while living on campus these two weeks. I won’t reveal their idea on this public post out of respect. It is ripe to be stolen, but so simple. If they execute this idea, it will be like the realization that putting wheels on luggage is marketable. I still can’t believe that humankind took until my lifetime to sell that product.

These teens are impressive, all are bi-lingual, one speaks five: French, Spanish, Creole, English and German. Most are college bound, some gifted athletes, all are technological wizards, one is a child actor, some children of entrepreneurial parents, and perhaps the most impressive of all, one does not currently use a cell phone.

They are also annoyingly chatty, addicted to screens, obsessed with music and fashion, too loud too often for my aging sensibilities, and junk food divas. Most can quickly shift gears from extremely polite to rude and obnoxious and back again. But this same “troublemaking” vibe, I know, is the pulse of entrepreneurship.

This morning, I was able to open our work day, sharing about another roomful of trouble making entrepreneurs and business owners near my home in Philadelphia. I told them about this group that included many bilingual, some successful business owners, while others produced more debt than success. One entrepreneur in this group of 56 was named George Taylor, a penniless immigrant laborer, who eventually became a company bookkeeper. His last step on his career climb was ownership and active management of the manufacturing operation in Pennsylvania.

Another, George Walton of Atlanta, worked as a carpenter’s assistant in order to afford to study law — then he opened his practice and sought his own clients. His family actively discouraged his dream, but he saved and scrapped together the savings he needed despite them.

Others were entrepreneurial shoemakers, printers, accountants, inventors, real estate investors, importers, scientists, retailers, doctors, lawyers and farmers. Some operations thrived, others failed, but all were trouble makers, in the entrepreneurial economy.

When this group gathered in the first week of July, they became a chorus of troublemakers, and they also did it in writing.

One traveler, an entrepreneurial government contractor, was a branding pioneer, as well. He boldly and prominently penned his name in a most memorable manner. More than twenty-four decades later his name is synonymous with the idea of a signature, John Hancock.

“Teach me and I may remember, involve me and I learn,” once quipped inventor, printer, publisher and provocateur Ben Franklin.

When I finished my remarks, our teenager students, on an eerily empty campus, due to the national holiday, were involved in their work all day & back at the dorms into the night. I responded to a student text query about how best to summarize their business plan near midnight. All were plotting to disrupt, calculating their risks, planning their victories, writing their business plans — their own troublemaking manifestos on the Fourth of July.

It was an unusual, but a spot on way to pay homage to the 56 historical entrepreneurs (most of them operated a business) who launched Independence Day.

This current generation of teens are poised to “turn the world upside down.” And the fireworks will be the best ever.

ABOUT BIZNOVATOR:
BIZNOVATOR is a youth empowerment platform that offers a year-round experience for young people interested in entrepreneurship, social innovation, and global leadership. Through our seminars, workshops, summer camps and in school Academies, BIZNOVATOR helps young people to DISCOVER their purpose, TRANSFORM their mindset and CONNECT to their future. We invite you to visit our website to learn more about our programs – www.biznovator.com

Juan Pablo Casimiro is Founder and CEO of BIZNOVATOR. With more than 30 years of empowering youth and adults globally, Casimiro never misses a moment to teach, coach and challenge his clients to live their dreams. Casimiro was born in the Dominican Republic, grew up in New York City, and resides in Miami, FL 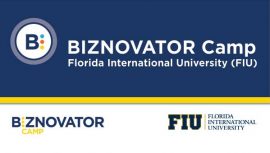